We often see soy in so many food products. Should we be concerned? Well if you consider that 94 percent of all soy grown in Canada and the United States is brand named “Round-Up Ready Soybeans” the answer would be yes. Many of us are familiar with Round-Up we have used it to kill weeds. “Round-Up Ready Soybeans” is a trademark owned by the Monsanto Corporation. These are soybeans that have bean genetically modified to allow applications of the herbicide Round-up to be applied while they are growing. “Round-Up” is also a trademark owned by the Monsanto Corporation. Here is a quick synopsis of Round-Up from the organization GMO Inside:

“Monsanto invented the herbicide glyphosate and brought it to market under the trade name Roundup in 1974, after DDT was banned. But it wasn’t until the late 1990s that the use of Roundup surged, thanks to Monsanto’s ingenious marketing strategy. The strategy? Genetically engineer seeds to grow food crops that could tolerate high doses of Roundup. With the introduction of these new GE seeds, farmers could now easily control weeds on their corn, soy, cotton, canola, sugar beets and alfalfa crops—crops that thrived while the weeds around them were wiped out by Roundup. http://gmoinside.org/15-health-problems-linked-to-monsantos-roundup-ecowatch/ #stopmonsanto #food #ag #GMOs”

The decision to consume soy rests with each of us as individuals.  Consider this image which was recently published. 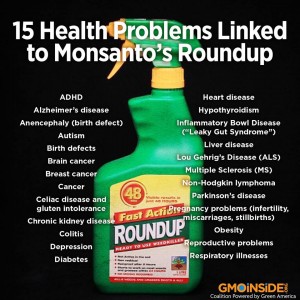 jerry cady has a degree in pre-medicine and a degree in business management and is a published author with a paper in organic chemistry. his life experience includes almost 30 years of experience consulting with physicians on pharmacologic treatment options for the top three pharmaceutical companies in the us. he has laboratory experience in microbiology, organic, in-organic, and biochemistry. other experience includes histology, and embryology. in addition jerry has spent 7 plus years working in the nutraceutical and dietary supplement industry as a consultant, manufacturing and product development, and as a principal at www.imssupplements.com

View all of jerry cady's posts.